As a nation of bodgers, this is why I’m not doing my own DIY work anymore 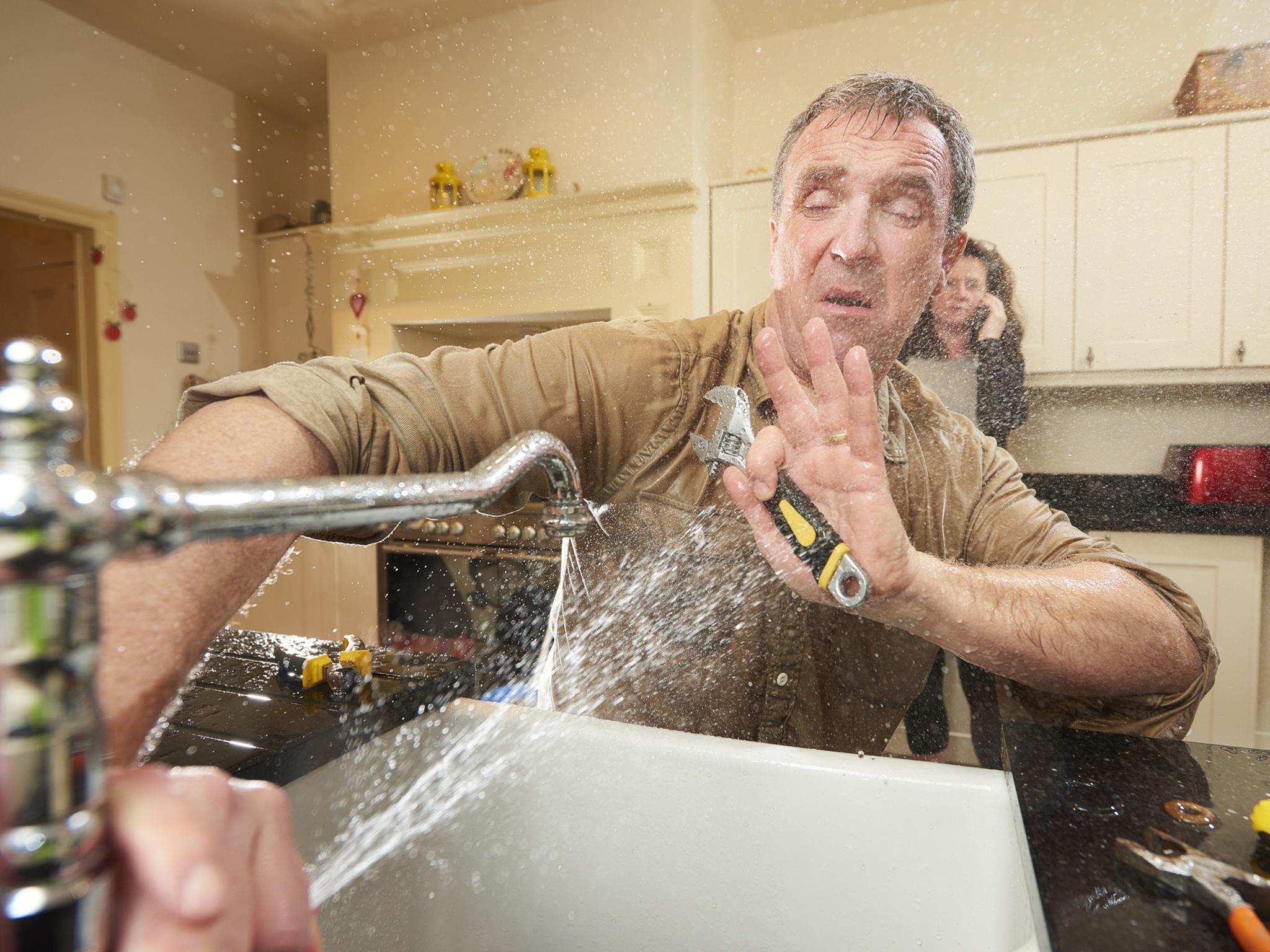 If ever there was a time that the spirit of my father would manifest itself, it would be right now, as I hover nervously in the doorway to my living room where there is a man painting my ceiling.

The man’s name is Matt and he is a very nice man. My dad would probably like him. However, the reason I can imagine his frowning ghost at my shoulder is that it is Matt, and not me, who is painting my ceiling.

I can imagine his look now, part bemused, part amused, part disappointed. Why, he would wonder, unless you are in traction or have had to undergo emergency amputation of all your limbs, would you not paint your own ceiling?

Sharing the full story, not just the headlines

Indeed, it’s something that doesn’t sit happily with me, hence the nervous hovering. I am wretchedly keen to be useful. Does Matt want a third cup of coffee? Should I move something? Maybe it’s enough to stand there, staring critically at the ceiling, rubbing my chin? Matt, on the other hand, really just wants to get on with the job at hand.

My dad wouldn’t have been nonplussed at me getting someone in to do a simple job through any ideas of masculinity or anything like that; it’s simply that he was a builder by trade and almost supernaturally handy. A trait that, despite my best efforts over the years, has utterly failed to manifest itself in my genes.

We are a nation of DIYers. Last month, the Confederation of British Industry revealed that there had been a boost in two areas of the retail economy, online shopping and DIY kit. This is in spite of – or perhaps because of – households still feeling that their incomes are being squeezed. Internet shopping tends to give access to more bargains while DIY is obviously a cheaper way of improving your home than getting tradespeople in.

Aside from being innately handy, it was certainly economics that drove my father to carry out any household job himself, and in my own years of DIY that’s definitely been the driving force. In the 17 years or so we’ve lived in this house, there have been few projects I’ve not decided I can tackle myself. Several have ultimately required the intervention of a specialist. But I can’t deny the rosy glow of satisfaction I got from giving it a go.

A survey a couple of years ago by Armstead, which supplies products to the building trade, revealed that while Brits love a good project in the home, we’re essentially a nation of bodgers, with one in ten of us actually injuring ourselves doing DIY, and there being on average more than 31 million unfinished jobs in British homes started by amateur improvers but never completed. What’s more, we spend on average almost £250 getting an expert in to fix what we’ve made a dog’s dinner of.

A godsend to bodgers like me has been YouTube, where you’ll find helpful videos on pretty much anything you care to do, even projects that really should be way out of your league. YouTube has helped me take most of my house apart and put it together again in a way that you’d almost never notice.

The only thing I won’t tackle is anything to do with the car, on the grounds that bodging a vehicle could quite easily end up in death or destruction of myself, my loved ones and innocent passers-by. This is despite my dad once nearly falling off his chair when I told him I’d paid a mechanic to service my car. “Why can’t you do your own oil change?” he’d said wonderingly, as though that was the most natural thing in the world, like breathing.

So, if I’ve been so willing to roll up my sleeves and dig in, why is Matt up a ladder doing something as simple as painting my ceiling white, which is surely the easiest of DIY jobs imaginable, the sort of thing your nan could do?

It’s a good question, and my nominal retirement from DIY has coincided with me becoming a full-time homeworker. Which, you might think, is a curious state of affairs. Working from home should, theoretically, give me more time to embark on projects, made doubly inviting by the lack of the usual spectators at evening and weekend fixtures who want to know if that thing really fits on the other thing, or if you should strictly be hitting that pipe with a hammer, or pointing out that you’ve missed a bit.

But with the freelance life comes a more acute realisation that time is money. It’s all well and good when you’ve got a salaried job, spending a Saturday afternoon or a Wednesday night trying to work out how to re-hang the bathroom door after you’ve taken it off to saw a bit off the bottom, but once you start devoting time out of your freelance working day to this, it means you’re not actually earning money.

Allied to that is the realisation that all those trades out there are in the same boat. We’re all in the gig economy together. I could take a day off to do a job and potentially lose a couple of hundred quid in earnings. Or I could pay someone else a couple of hundred quid to do a job. Swings and roundabouts, but ultimately am I not supporting my freelance colleagues by doing the latter?

But the primary reason for deciding to leave it to the experts is my long and ignominious list of failures, near-misses, and unfinished jobs, of which I will avail you of just a sample selection.

There was the time the mixer tap broke on the kitchen sink. I resolved that we needed a new tap. The only thing was, I couldn’t get the tap out of its housing. Enterprisingly, I decided to remove the entire sink and had to walk across Bradford city centre with it on my shoulder to a plumber’s merchants to get a new one and plead with them to get the knackered one off.

There is the ongoing situation with the bedroom, and I’m risking an almighty row by even just mentioning this. I decorated it from top to bottom last year, promising faithfully that I would tidy up all the scrappy bits of wallpaper hanging off corners and under coving and on skirting boards. I have yet to fulfil this pledge.

And as an addendum to this sorry tale, there’s the issue of the DIYer being tempted to buy cheap to make the project even more cost effective. In this particular case, instead of going for more expensive and easier to hang paper where you paste the wall, I opted for the least expensive option which involved soaking in wallpaper paste paper that was already as thin as a Rizla paper, resulting in it ripping, tearing and sliding all over the place. For bonus points I used a knackered old stanley knife to cut the excess off. If you’ve ever tried to use a blunt craft knife to slice wet paper, you’ll be aware that the result looks like something chewed by a pigeon.

I have umpteen stories of decoration going wrong, such as the time I decided to wood panel the walls in what was to become our baby daughter’s bedroom. I dutifully spent a day gluing the panelling all along the bottom half of the four walls, and got up the next morning to find it had all fallen off.

But perhaps the most ill-advised project I ever undertook was tackling the problem of low water pressure in the bath, which involved taking apart an actual gas boiler. Don’t worry, I watched at least three YouTube videos before embarking on it, and I never actually touched any of the gas bits, just the water stuff. And it did actually work. But it’s not something I would advise, or would indeed have another go at.

All of which is why Matt is up his ladders in my living room, painting. We had previously got him in to plaster the ceilings to render the horrible stipple effect completely smooth (as an aside, something I once briefly tried to do myself with a big tub of ready-mixed stuff. It all ended up on my head after resolutely refusing to stick). After watching him do it, I bit the bullet and asked him to come back and paint the ceilings. And now he’s going to come and paint the walls.

I still do the odd thing, of course; yesterday I put up two new light fittings, which took precisely three times longer than I thought it would and was accompanied by much sweating and cursing. But I make no apologies for retiring from the bulk of DIY. In fact, it’s hugely liberating. Sorry, dad.

Any cookies that may not be particularly necessary for the website to function and is used specifically to collect user personal data via analytics, ads, other embedded contents are termed as non-necessary cookies. It is mandatory to procure user consent prior to running these cookies on your website.