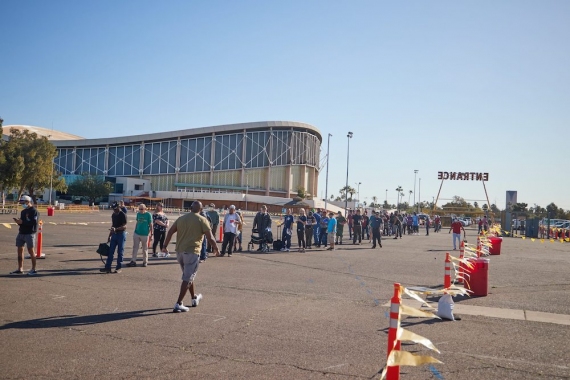 Veterans line up to enter the 2022 Maricopa County StandDown at the Arizona State Fairgrounds in Phoenix on Thursday, March 17, 2022. At the StandDown, veterans and their families who are experiencing housing insecurity and homelessness are connected with various services, including legal, medical and haircuts. – Alex Gould/Cronkite News

Hundreds of veterans lined up Thursday at the Arizona State
Fairgrounds to get help at the 20th annual Maricopa County StandDown,
hosted by the Arizona Veterans StandDown Alliance.

They queued up for showers, haircuts, legal and medical services,
housing and employment assistance – even veterinary care for their pets.

The StandDown alliance, a program of the Arizona Housing Coalition,
hosts events in 13 of Arizona’s 15 counties, where veterans can meet
with providers for a variety of services. The Maricopa County StandDown
was started in 2001 but wasn’t held last year because of COVID-19
concerns. Similar events – coordinated by local Veterans Administration
medical centers, the Department of Labor, other government agencies and
homelessness service providers – are held around the country.

“We’re really excited that there’s so many veterans here in line just
this morning,” said Emma Muriel, communications manager for the Arizona
Housing Coalition. “I roughly estimated about 300 were already waiting
before 8 a.m., and we continue to see that number go up. We’re just
excited to have everyone out here and be able to provide the services
around housing, legal services, medical and employment as well.”

Because the StandDown wasn’t held last year, many volunteers were excited to return to support veterans.

“It’s absolutely amazing,” said Kyla Lout, who was a vendor this year
but has received services at past StandDowns. “There are so many
resources that are out there, and there’s so many people, so many
veterans that need help.”

According to the Maricopa Association of Governments, homelessness has risen by 35% since 2020. Homelessness has been on the rise
for years in Arizona, tracking national trends, and the pandemic placed
even more strain as people lost their jobs, putting them at greater
risk of experiencing homelessness.

As of 2020, 921 veterans were experiencing homelessness in Arizona, according to the U.S. Interagency Council on Homelessness.

Cedric Collins, who teaches at Vista Grande High School in Casa
Grande and is running for the Arizona House, volunteered after learning
about the StandDown on Instagram.

Collins, whose brother, father and grandfather are veterans, said the
homeless population in Phoenix has increased because of overpriced
housing and stagnant wages.

“Arizona is turning into the new California, but people aren’t being
paid California wages; they’re still being paid Arizona wages,” he said.
“Working-class people are now being priced out of their homes and
apartments because rent is going up so high, but their wages aren’t
increasing.

“I believe veterans make the ultimate sacrifice for us; without them
we wouldn’t be able to enjoy the frivolous things, like, going to a
ballgame. I think it’s only right that we give something back to them.”

How Do You Make A Title Insurance Claim?

Take Refuge this Winter with Soothing Earth-Based Hues from Dulux